As a member of the European Union and the Schengen zone, Hungary is among the 30 most-visited destinations on the planet. It boasts a rich and diverse culture (everything from music and film to food and literature).

Traditional dishes such as the world famous Goulash are popular. Dishes are often flavoured with paprika (ground red peppers), a Hungarian innovation.‪

Pálinka is a fruit brandy, distilled from fruit grown in the orchards situated on the Great Hungarian Plain. It is a spirit native to Hungary, and comes in a variety of flavours including apricot (barack) and cherry (cseresznye). However, plum (szilva) is the most common flavour.

Hungarian laws have zero tolerance to drink and drive, and the penalty is a severe fine. Failure to pay fines may result in your passport getting confiscated, or even a jail term until or unless you pay the fine.

More importantly, the police stop vehicles regularly for document checks. You shouldn't worry when you are stopped because by law, everyone needs to have their identification papers checked.

Hungary has some of the harshest, if punishing penalties if people are involved in a car accident. Involvement in a car accident results in a fine, and maybe a jail sentence from 1 year to 5 years (depending on the aggravating circumstances).

Most banks allow foreigners to open an account with just the presentation of a passport, but some banks also require a valid residence permit and/or a tax card. Banks charge a fee for openning a bank account and issuing a bank card.

Banking hours: Regular branches are usually open from 9 a.m. to 5 p.m. Monday through Thursday. On Friday, banks close earlier - usually at 3 or 4 p.m.

ATMs are common in Hungary and are accessible anytime. Most banks don’t charge fees as long as you use their machines, although there may be a limit to the number of transactions you can perform per month.

You will be able to use your credit cards at larger stores around town. But when you shop in smaller grocery stores and souvenir shops, you might have to pay in cash.

Electrical sockets (outlets) in Hungary are one of the two European standard electrical socket types: The "Type C" Europlug and the "Type E" and "Type F" Schuko.

Hungarians normally give tips when eating out, having a drink at a bar, or when using a taxi. The tip is usually 10% of the price. It is considered rude if you don't give a tip to the waiter. It means that you were absolutely dissatisfied with the service.

Keep in mind that tipping in itself often does not reach waiter or bar personnel. The management of many Hungarian restaurants and bars or pubs will often keep the tips to themselves and not share it with staff except as a way to pay their salaries. In short, ask if the tips go to the worker or the owner. If it goes to the owner, save the money and leave a kind word, or find a different place to spend your time and money. Some staff have been ordered to lie if asked. If the tip goes into the till and not into a jar or the worker's pocket, then eat, drink or ride elsewhere.

The Hungary country code 36 will allow you to call Hungary from another country.

Hungary has an extensive cellular telephone network and personal cell phones are commonplace. Major providers are: Vodafone, Telenor and T-Mobile.

When you buy a mobile phone you can choose to either prepay or postpay for your phone usage.

Hungary has a continental climate,‪ with hot summers with low overall humidity levels but frequent rainshowers and mildly cold snowy winters. Average high temperature in the summer is 23 to 28 °C and average low temperature in the winter is −3 to −7 °C.

Swimsuits are essential – there are more than 1,000 hot springs in the country, and 118 in the capital, Budapest, alone.

Even if you meet someone of the opposite sex for the first time, it's not unusual to kiss each other on the cheeks instead of shaking hands as a greeting.

It's an old tradition (although nowadays not held by everyone) that Hungarians do not clink beer glasses or beer bottles. This is due to the legend that Austrians celebrated the execution of the 13 Hungarian Martyrs in 1849 by clinking their beer glasses, so Hungarians vowed not to clink with beer for 150 years. Obviously this time period has expired, but old habits die hard. This is not so much followed by the youngest generation. 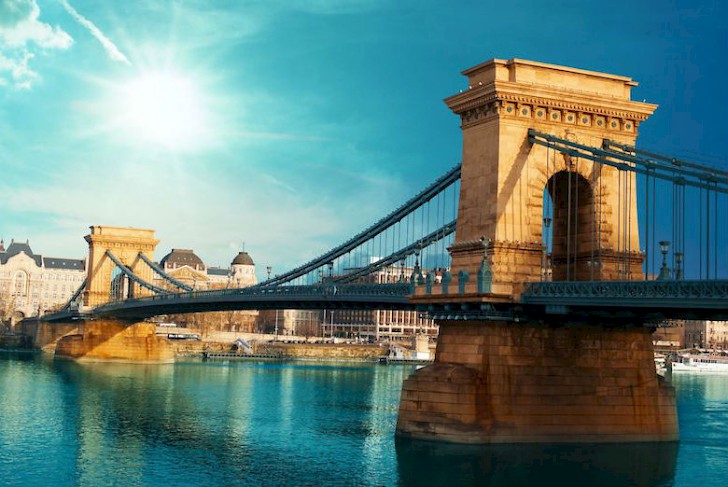